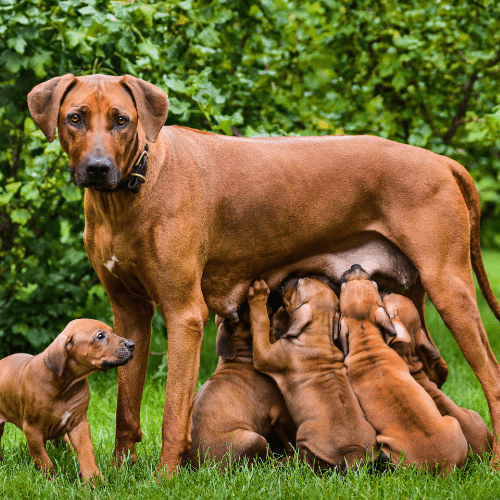 Dog pregnancy: What you need to know Philippa is a certified dog trainer and behaviourist. Having set up her business Animal Friend in 1997, she believes in taking a kind and holistic approach to dog training. Her passion is helping owners to understand their dogs and increasing the bond between canines and humans.

Are you thinking about breeding from your female pup? Or simply curious as to how it all works? Read on to learn all about dog pregnancy from expert canine behaviourist Philippa Short. 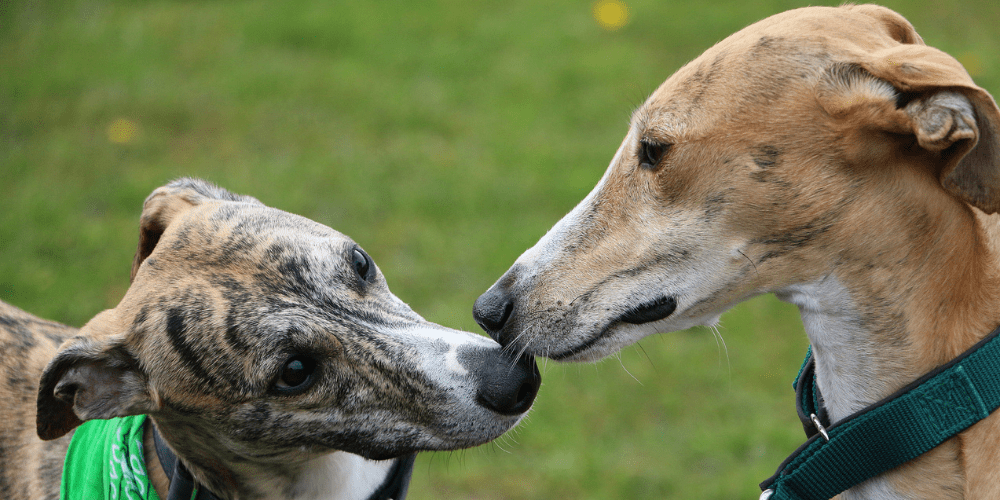 How does a dog get pregnant?

For a female pup to get pregnant:

Female dogs can get pregnant once they’ve had their first season. They come into season up to twice a year for around 21 days each time, though a cycle can last for up to 28 days.

Once the dog’s vulva is swollen and her bleeding turns into a light discharge, she’s ready to receive males. This is normally around days nine to 16 of the cycle but can be as early as day three.

For a full breakdown of dog periods and seasons, check out our handy guide on the dog heat cycle.

If you want to breed from your female dog then it’s ideal to get a progesterone test done. The test tells you (within a 24 hour window) when she has the highest chance of conceiving. This is especially helpful for females in their first season as ovulation can be delayed.

> How long after mating can you tell a dog is pregnant

A reliable way to tell if your dog is pregnant is via a blood test or scan.

You can take your girl for a blood test three weeks after (and for a scan four weeks after) mating.

Most people will go to their vets but you can also visit a canine midwife for these check-ups. 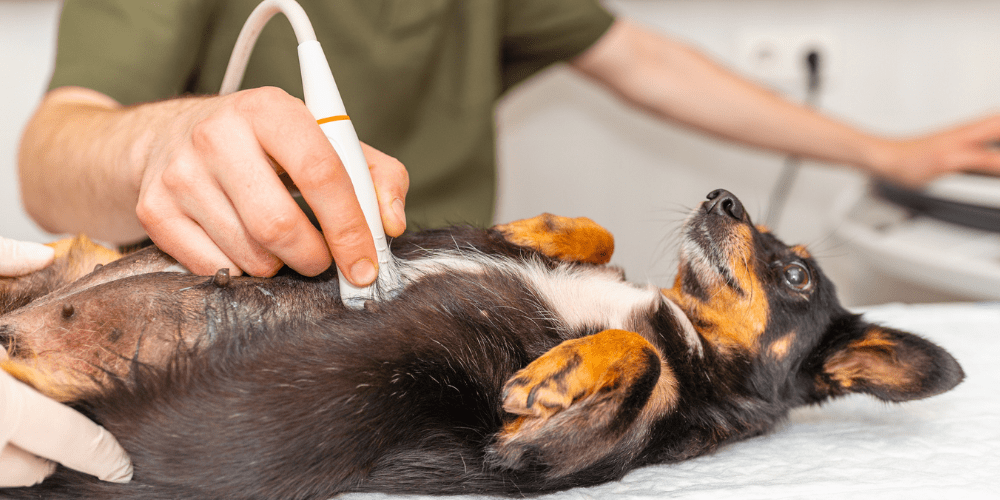 The average dog gestation period is 63 days but can last between 59 and 65 days.

Call a vet if your female’s puppies start to come earlier than 59 days. This is because their lungs may not be fully developed and there may be other issues.

Your pooch should also see a vet if she is running six days or more past her due date. She may end up needing a c-section if the puppies grow too big.

So, how do you know if your dog is pregnant?

Breed and hormones play a big part in what pregnancy symptoms your girl may start to show. These include:

Nesting behaviours can be stronger in some female dogs, so be aware if they start shredding and destroying things – and don’t get cross. They’re not being destructive and disobedient for the sake of it, they’re simply trying to make a nest. The same is true for the garden. Terriers and Collies will dig holes outside to create a birthing spot.

Most importantly, watch your pregnant pup for red flag symptoms. If she shows any of the following, go to your vet immediately:

> When can you feel the puppies move in a pregnant dog

The time when you can feel the puppies move inside a pregnant dog varies with each breed. For some, it will be obvious as their belly pops out and you can see the pups moving under the skin.

But it can be harder to feel all of the puppies with some dogs. This really depends on how many are in the litter and where they’re sitting in the mum’s uterine horn. An ultrasound can’t see past the bone, so it might not catch them all on the monitor.

If you’re ever in doubt about the number of puppies your girl is carrying, visit your vet. 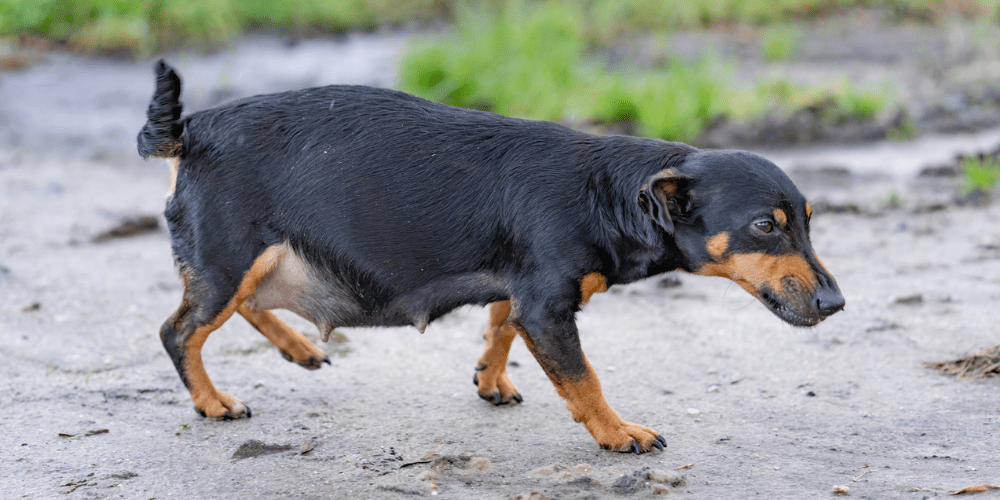 Caring for your pregnant dog

How you exercise your pregnant pooch depends on her breed. In her second month of pregnancy (from 30 days onwards), you don’t want any boisterous play with other dogs. This is because there’s a risk of collision with her belly.

But being careful doesn’t mean wrapping her up in cotton and confining her to the house!

Let your pooch take the lead (pun intended) on exercise. Try to stay away from heavily dog-populated areas and hire an exclusive dog-walking field instead. She can run and stretch safely without needing to be protective over her stomach.

When it comes to feeding your pregnant girl: 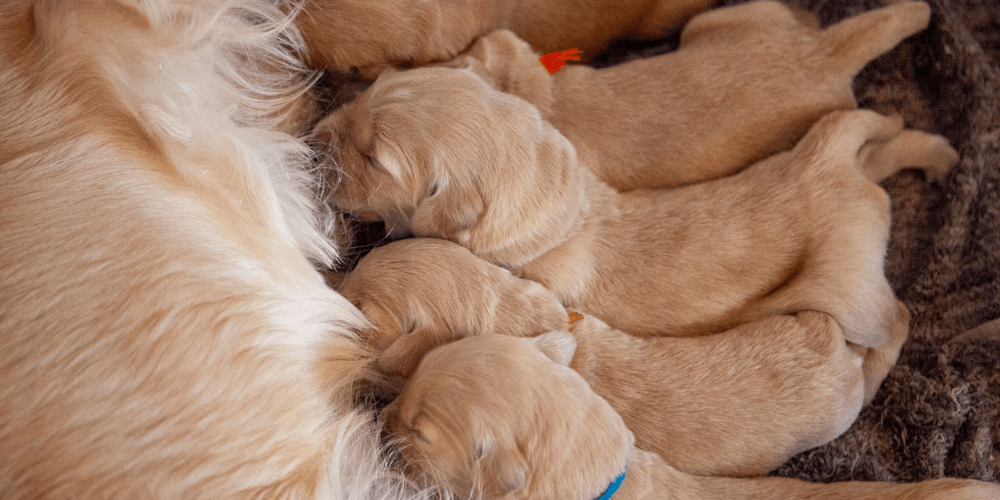 What to expect from the last two weeks of dog pregnancy

> How to prepare for your pregnant dog’s labour

You’ll want to set up a whelping box at least two weeks before your girl’s due date. This is a four-sided box with little rails. The pups can then move out of the way of mum without getting trapped. The box should be:

Many pet owners choose their bedroom as the whelping area of the house. You can use calming sprays and music to help your pregnant pooch feel her babies will be safe.

Once the whelping space is set up, the only people allowed in are those in your girl’s circle of trust. Others can then go in once the puppies are three weeks old.

Other things to prepare: 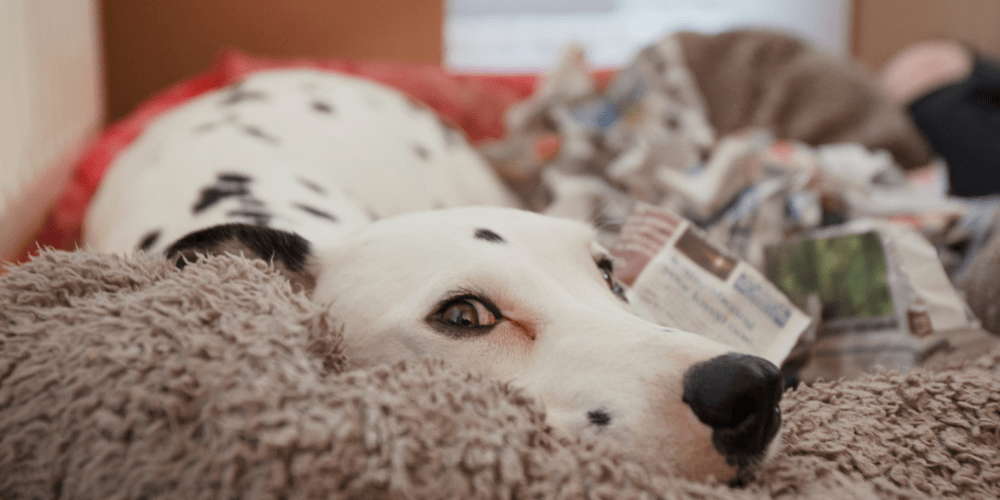 > What are the first signs of a dog going into labour?

So, how do you know if your dog is getting closer to labour? In her last week of pregnancy (and depending on the size of her litter) she can show the following signs: 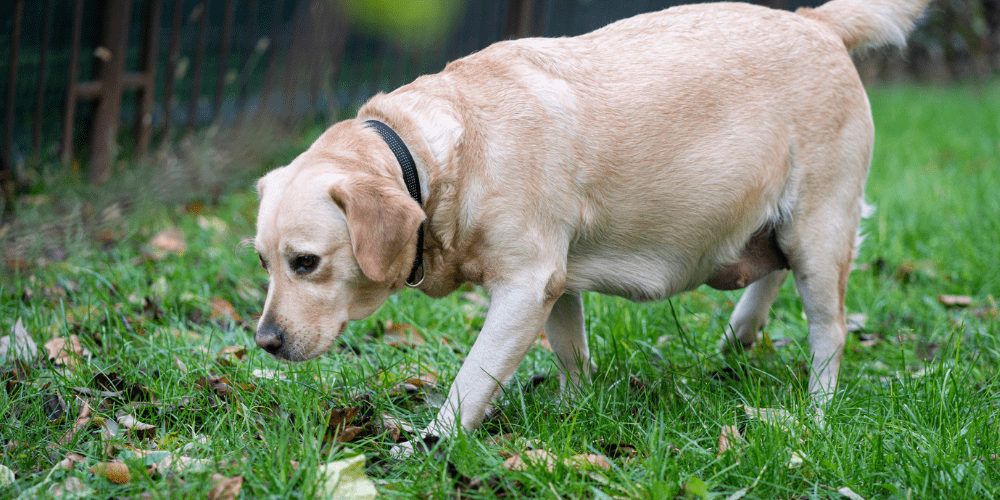 During the first stages of labour, your pregnant pup will be:

During the second stage of labour, your pooch will:

Puppies normally come out head first, often still in their amniotic sack, and your dog will be aware they have come through. She may half sit up and lick as the puppy is coming out, or wait until the pup is fully out. 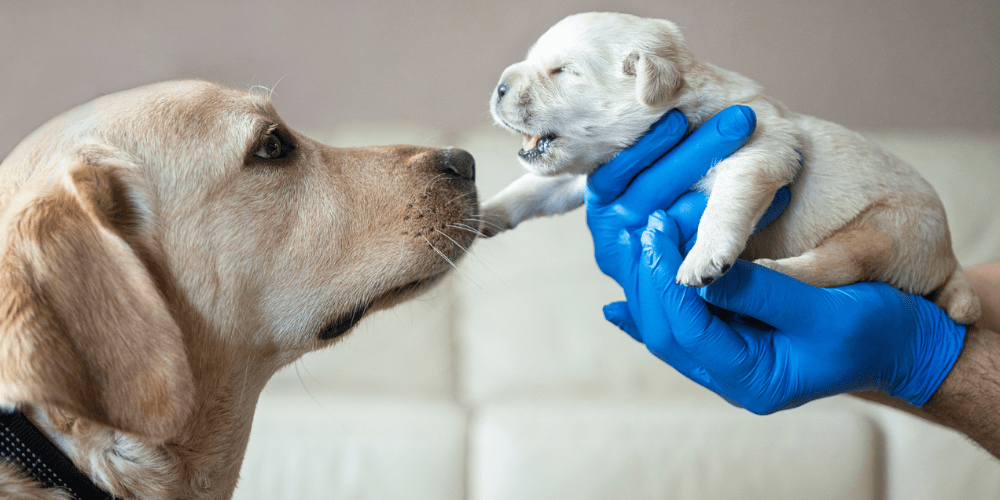 > Helping your pregnant dog during birth

As soon as the puppy is pushed out, the sack needs to be broken.

Most mums will do this themselves, but if you see her struggling (especially if she’s a first-time mum), you can give her a hand.

Use your fingernails to gently tear the sac open so the puppy is breathing.

Dog mums will naturally chew through the umbilical cords themselves and often want to eat the placenta.

The next step is for your dog to stimulate her puppies by licking them constantly from head to foot. This is part of their bonding process so if she’s getting on well, just be a quiet observer and give gentle praise.

Only step in to help if you can tell she’s struggling or the puppy looks lifeless (they should be squeaking and fidgeting). For example, the puppies may be coming so quickly that she doesn’t have enough time to stimulate them properly. 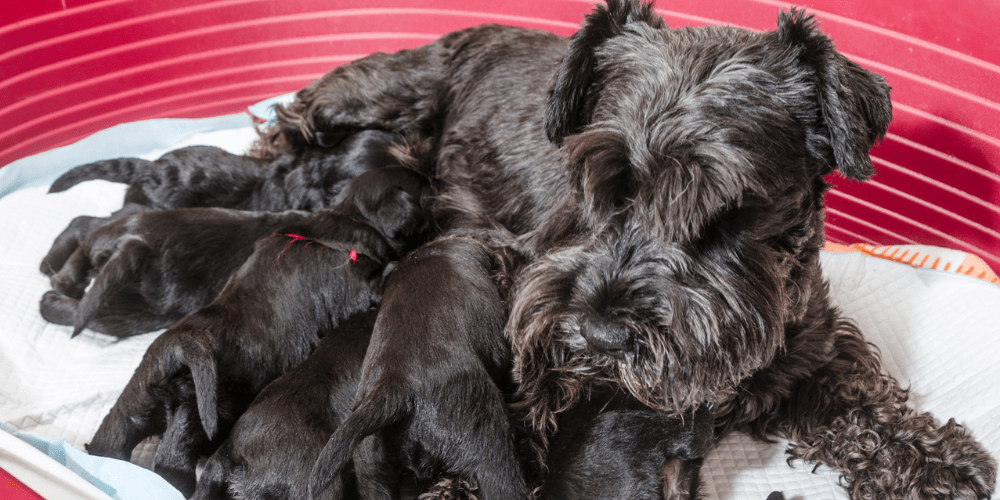 > Recording and monitoring the puppies

Identifying and recording the puppies is really important for following their growth and checking for disabilities or internal problems.

You’ll then want to weigh them every few days to make sure they’re latching and feeding properly.

To record the puppies:

The important things to remember with recording the puppies: 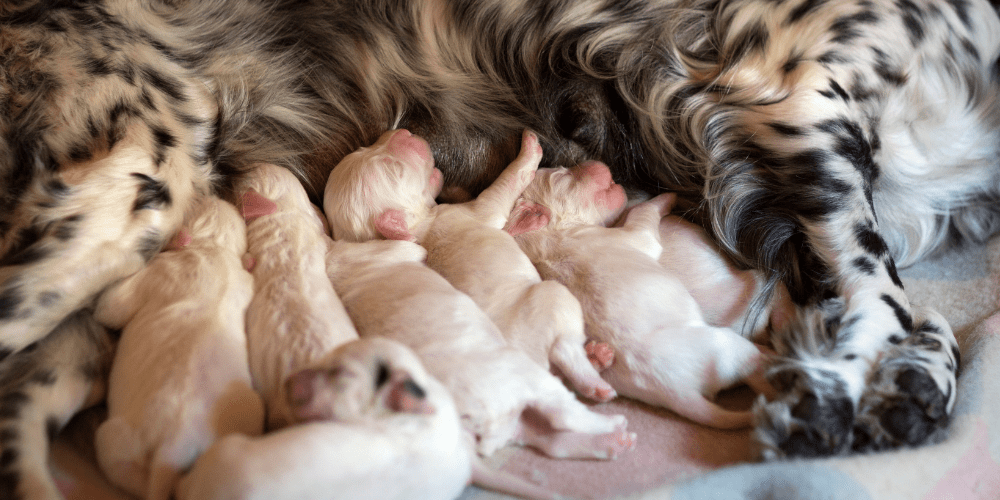 What to do if your dog is in distress during birth

If you’re worried about your dog during their labour, call your vet. They may either come out to you or ask you to bring her into the clinic.

You may need vet help if your girl:

Not all puppies will survive – and this is very normal for dog pregnancies. There’s also a risk that mum won’t make it through, so it’s something to think about when you’re looking at breeding.

Things can go wrong quickly, so keep a close eye on your female pup and make sure you’ve got an emergency vet line. 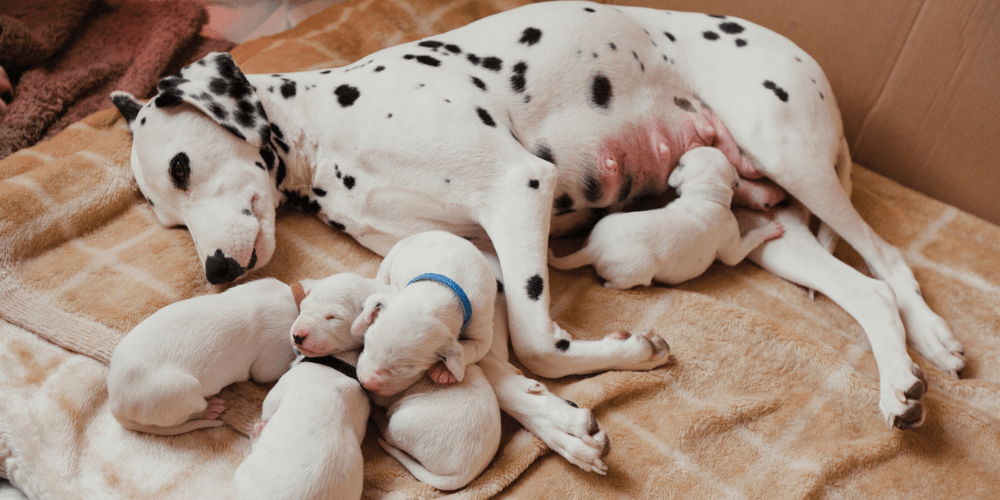 What to do after your pregnant dog has finished giving birth

Some mums will have:

Other mums who’ve just had their first or a big litter may be a little more overwhelmed. So you might need to help her by:

Remember, you’re helping but not taking over. If she’s coping well, leave her to nurse the puppies.

Don’t let any other animals in the house near the puppies for the first two or three days. Only when mum is happy can they get close.

You’ll want to stay with her for at least the first 48 hours, especially if it’s your dog’s first litter. Yep, this includes sleeping next to the whelping box! You’re making sure she’s emotionally comfortable before you leave her.

Most importantly, don’t do anything with the puppies when mum isn’t there. This will break your trust with her and she won’t want to leave them alone again.

> Toileting after your dog has given birth

> Feeding after your dog has given birth

> Bathing after your dog has given birth

Look after your top canine throughout her life with Petsure dog insurance.